The Real Winner of the NBA Draft? Local Radio

(July 8, 2019) Every year, basketball fans – especially those of underdog teams – hotly anticipate the NBA draft. After all, their local teams have a shot at nabbing the next LeBron James or Michael Jordan. And yet, nothing about the draft is absolutely certain. What makes the NBA Draft so exciting is that there are plenty of surprises.

But the draft isn’t a just a story about teams and players. It’s also about local radio, especially the hometown stations of fan favorites. This annual programming event – and others like it – holds high potential for radio programmers and management.

To illustrate the potential, Media Monitors analyzed changes in PPM listening for a few key markets on June 20, the day of the 2019 NBA Draft, using our new breakthrough programming tool, Audio Overnights. This new service, developed in collaboration with Nielsen Audio, provides next-day information about the audio tuning behavior of PPM panelists. Audio Overnights delivers a daily count of raw panelists meter count and quarter hours for the previous day and offers filters and breakdown by demo/daypart. The data is designed to enable programmers and station management to react faster to market and station changes. It’s a great way to estimate future ratings.

Here’s what we learned about the audio tuning behavior of PPM panelists for the 2019 NBA Draft.

In Los Angeles, the draft began at 4 pm PST and although the Lakers had given up their #4 pick to the New Orleans Pelicans, the draft had a big audience. Local station KSPN-AM saw quarter hours among this demo nearly triple during the 3 pm to 7 pm slot compared to the same day the previous week, according to the Audio Overnights data.

Likewise, the draft was a major draw for San Jose’s local station KNBR-AM, which gained new 18-34 year-old PPM panelists during the 3 pm to 7 pm time slot and tripled its quarter hours for the day compared to the same day the prior week. 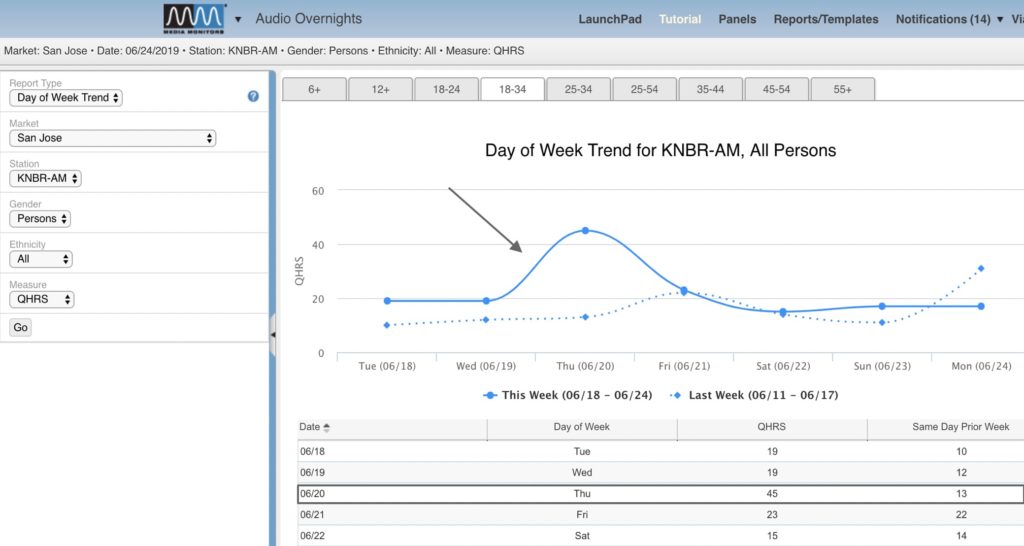 In Boston, local station WBZ-FM saw its daypart quarter hours for this demographic rise by nearly 50% compared to the same day the previous week. 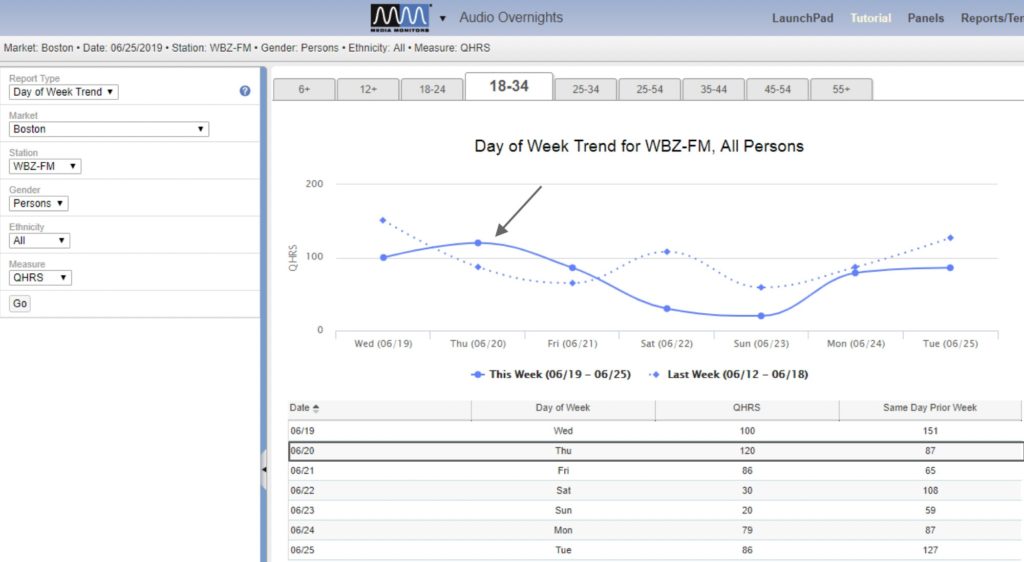 In Chicago, 25- to 54 year-olds PPM panelists tuned into WSCR-AM, which experienced an 82% increase in quarter hours among this demo on the day of the draft, as compared to the same day the prior week. The Audio Overnights data also showed that in the 7 pm- midnight slot, the drop was even more pronounced as quarter hours jumped nearly 400 percent. 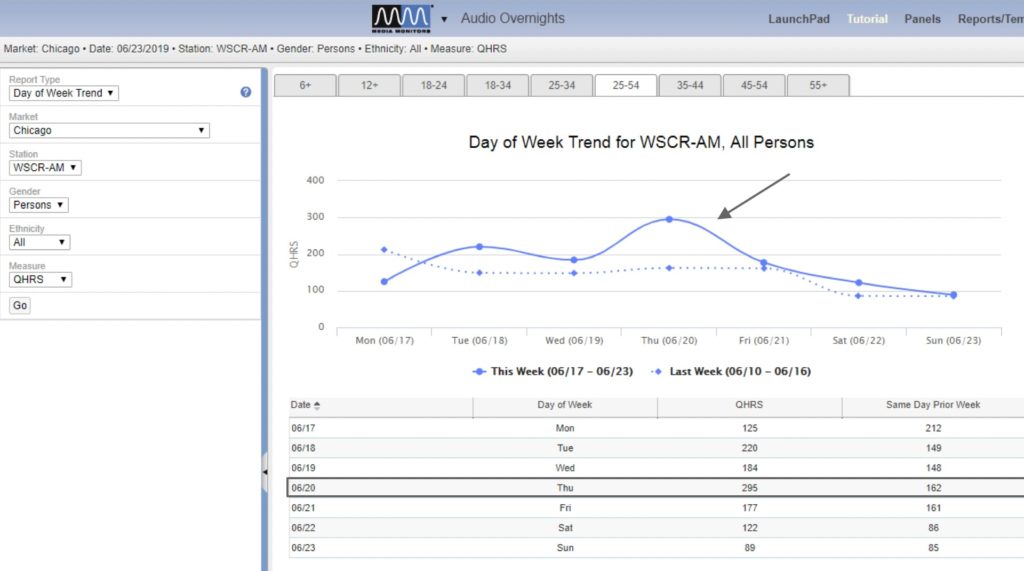 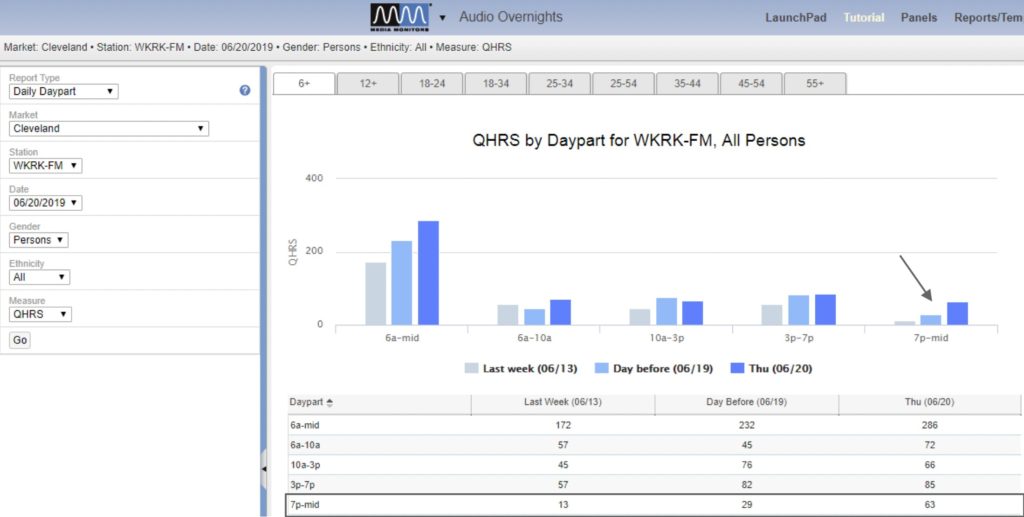 It may be a midsized city, but Cleveland is a big sports town with a special interest in professional basketball. After all, this is Lebron James’s hometown. So, it’s not surprising that local station WKRK-FM gained a wider audience. On the day of the draft, the number of quarter hours rose by 67% in the 6+ demo, according to Audio Overnights data. 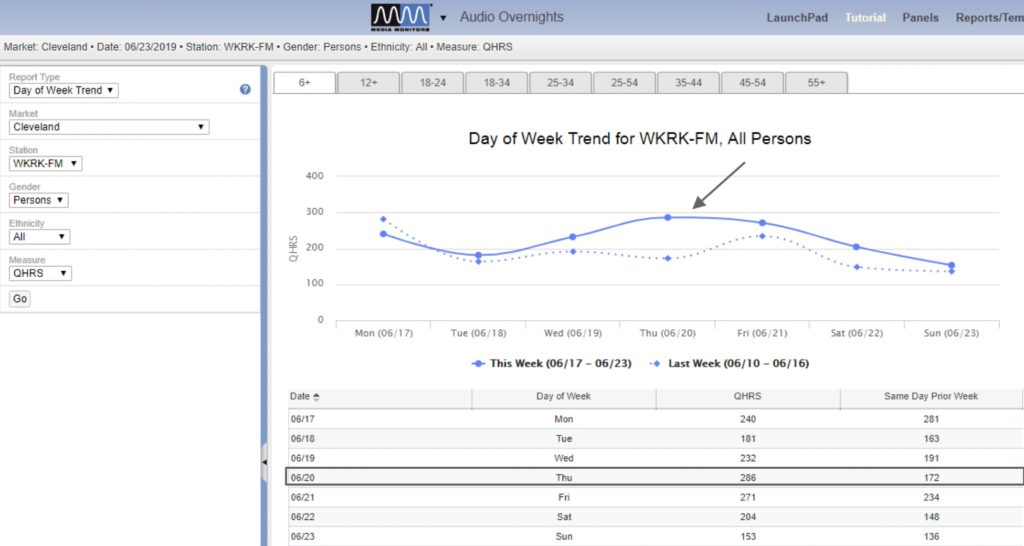 High Jump During the Draft: Cleveland

The Cleveland radio market is also noteworthy for WKRK-FM’s jump in quarter hours during the time of the draft itself. The station saw quarter hours spike by nearly 5X among the 6+ demo for the 7 pm- midnight slot, compared to the same day the prior week.

Programming directors and station managers can use Audio Overnights to determine what best drives ratings. Big events – especially sports-related ones – are major draws. Planning your programming around such events and selling advertising against them is a smart radio strategy.

Keep ahead of current advertising trends with Media Monitors.