“The Daily” Closes In On Joe Rogan’s Podcasting Crown

The Media Monitors Podcast Listener survey was fielded between March 14th and 31st, 2021. Participants aged 18+ were screened on whether they had listened to a podcast in the last 7 days, then asked to list the podcast titles. Participants were encouraged to consult their podcast app of choice during the survey. These unassisted responses were then individually matched back to unique RSS feeds which were polled to collect information about genre and publisher. 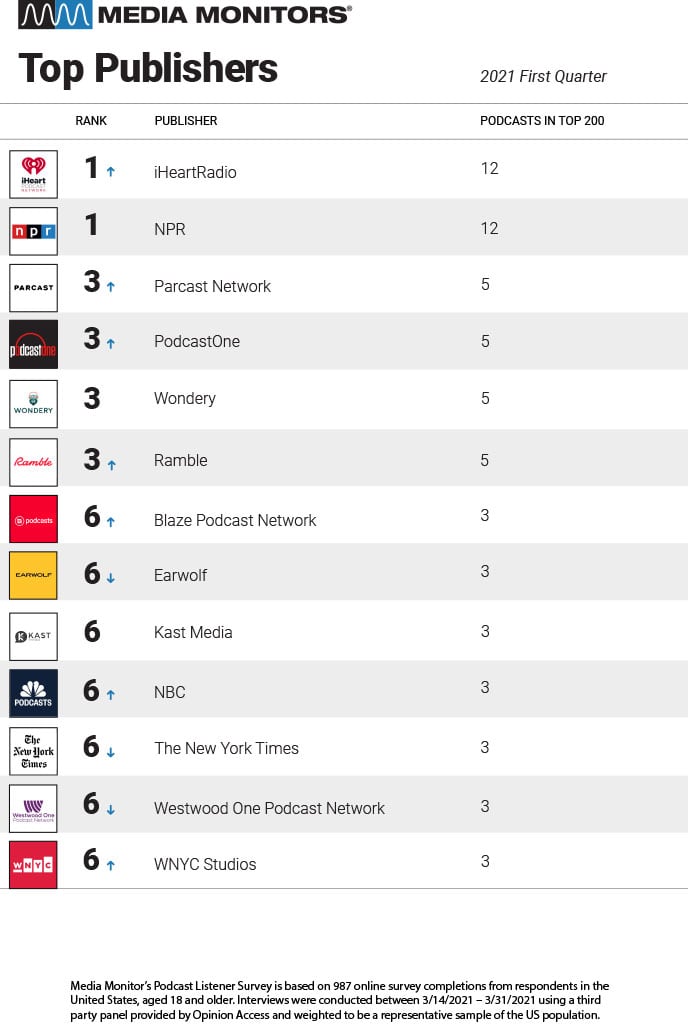 iHeart and NPR tied this quarter, each with 12 podcasts in our Top 200 chart. iHeart’s resurgence from Q4 of 2020 comes with the launch of a number of new shows including Here’s the Thing with Alec Baldwin (#64) which premiered with iHeart in January. Another newcomer to the Top 200 is iHeart’s Hell & High Water with John Heilemann at #180.

PodcastOne also bounced back after a Q4 dip, with The Steve Austin Show at #54, Court Junkie at #173, and Hotboxin’ With Mike Tyson at #179.

The Joe Rogan Experience saw a decline in listener share for the second straight survey cycle since becoming exclusive to Spotify in December 2020. The drop in number of responses alongside the consistent quarter-over-quarter growth of The Daily and Crime Junkie indicates that we may see a new number one podcast in the coming months.

The H3 Podcast from Ethan & Hila Klein cracked the Top 25 this quarter. Though it has consistently been a Top 200 show, this quarter saw a surge in listenership following drama surrounding “Frenemies,” one of the three distinct shows published in the feed. The H3 Podcast RSS feed publishes the titular H3 Podcast, Frenemies which Ethan co-hosts with Trisha Paytas, and H3 After Dark.

Comedy remains the most popular genre of podcast, but Society and Culture podcasts surged from 20 in Q4 to 32 in Q1 to tie for second place with News. History podcasts also saw a bump to 10 shows total in Q1, beating 4 total podcasts in Q4.