Summer, of course, is the biggest travel season of the year, which means tourism bureaus are turning up the heat to attract visitors to their cities, towns and beaches. For some – including several that rank among the top 10 national and local advertisers, according to Media Monitors – increased awareness may also land them a coveted spot on the “best places” lists that many travel magazines publish each spring.

These lists are commonly referenced in online travel searches and factor into travelers’ plans. Thus, broadcast advertising can play a significant role in influencing which destinations catch the attention of both editors and travelers. 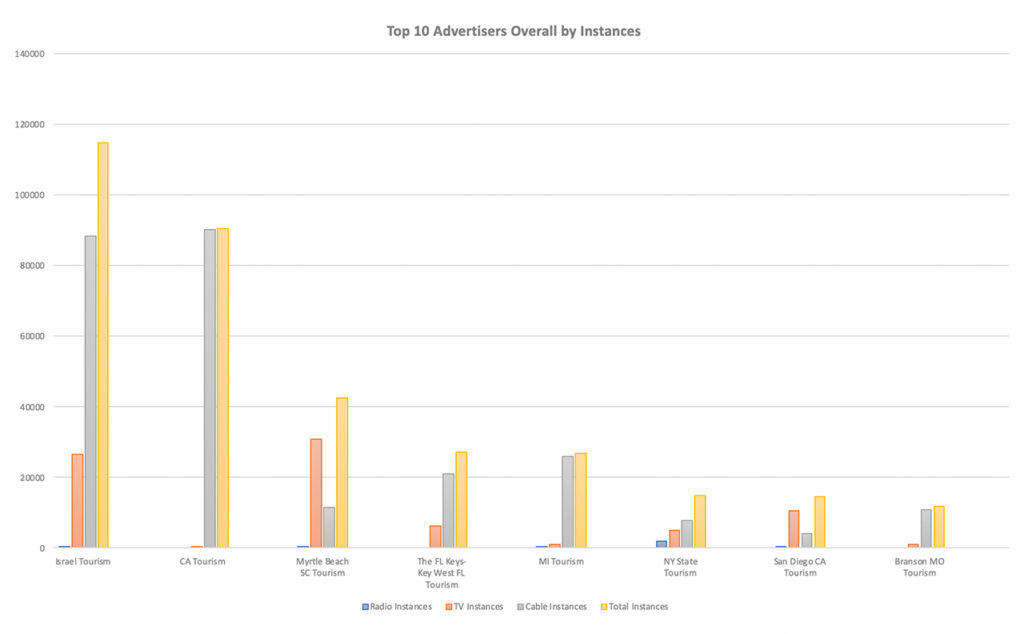 In the U.S., several tourism bureaus in New York, California and Florida are among the top 10 national advertisers, according to Media Monitors and many of these same vacation destinations also have appeared in one or more “best of” lists.

For instance, the California Travel and Tourism Commission was the no. 2 national advertiser overall, airing nearly all of its 90,526 spots on cable TV, according to Media Monitors. Napa Valley and its wineries are featured in an idyllic scene of bocce ball and wine tasting amongst the grape vines in the Commission’s ad, “Spoil Yourself in California.” So it comes as no surprise that Napa Valley is one of the “10 Best Places to Go to in June,” according to Town and Country magazine.

The Florida Keys was named one of Travel and Leisure’s “50 Best Places to Travel in 2019”. As the no. 4 national advertiser, the Florida Keys -Key West Tourism Bureau aired 27,297 spots, mostly on cable TV.

The no. 1 national advertiser, however, is the only international destination on the list. The Israel Ministry of Tourism ran 114,919 spots, of which the majority – 88,455 – aired on cable.

In TV, the San Diego Tourism Authority is the no. 3 advertiser. With a goal to attract family vacationers, their advertisement, “Smile Together in San Diego,” features children enjoying San Diego’s pristine beaches, its world-famous zoo, family activities and more. The tourism bureau’s efforts landed them the no. 6 spot on US News’s “Best Family Vacations in the USA” list and a feature in Good Housekeeping’s article, “30 Best Family Vacations That Will Please Travelers Young and Old Alike.”

Although all of the advertisers in the top 10 were national brands that funnel their marketing efforts mainly through cable and TV, most of the top 10 local travel and tourism advertisers primarily reached their target audience through radio. In fact, four of the top 10 – Central City CO Tourism, Black Hawk CO Tourism, Surfside Beach SC Tourism, and AR Delta Byways Tourism – aired all of their advertising on radio.

Keep ahead of current advertising trends with Media Monitors. Sign up today to receive news about future rankings.

From Local Internet to Radio to Local Cable to Broadcast TV and Newspapers, Media Monitors delivers competitive intelligence in a fast and easy to use web platform. We know advertising.Sales: (914) 428-5971
Support: (800) 676-3342