The Media Monitors Podcast Listener survey was fielded between December 14th and 31th, 2020. Participants aged 18+ were screened on whether they had listened to a podcast in the last 7 days, then asked to list the podcast titles. Participants were encouraged to consult their podcast app of choice during the survey. These unassisted responses were then individually matched back to unique RSS feeds which were polled to collect information about genre and publisher. 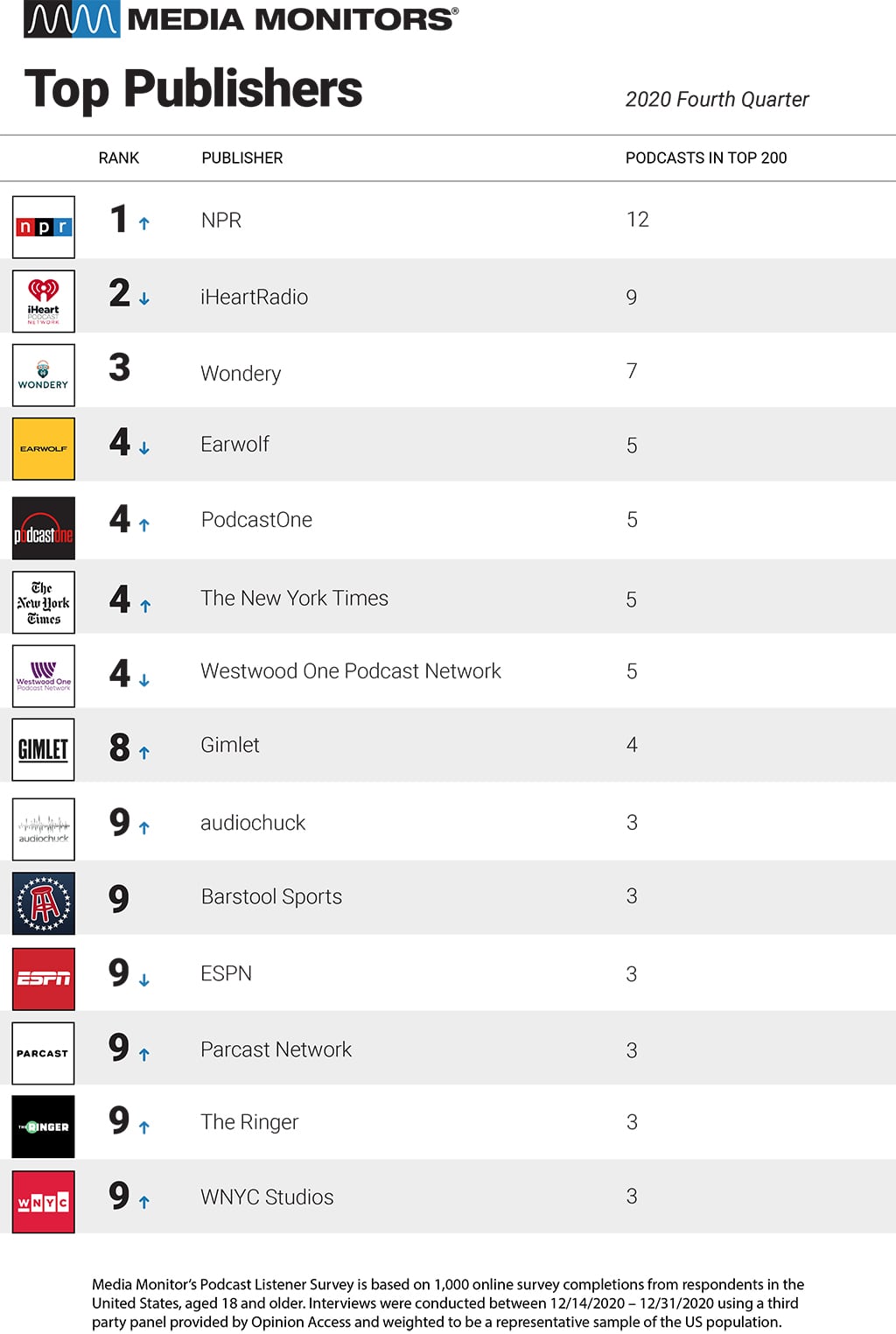 NPR leads all publishers on the Top 200 chart with 12 podcasts, consistent with their total from Q3. Q4 2020 marks the first time iHeart has ranked second in Media Monitors Podcast Listener Survey. This position swap seems to be in large part due to several iHeart mini-series finishing their seasons. Paper Ghosts for example, ranked at #15 in Q3, has disappeared from the Q4 ranker entirely – the miniseries ended in early October.

Q4 also finds Wondery once again ahead of a pack that include familiar names including Earwolf, PodcastOne, The New York Times, and Westwood One.

Although still solidly in first place, The Joe Rogan Experience saw its first ever decline in share of responses on our Podcast Listener survey in Q4. The Daily and Crime Junkie both saw their share increase once again, cutting the distance between their ranks and Joe’s #1 spot.

iHeart Podcast Award winners: Office Ladies (Winner: Podcast of the Year) moved from #18 to #9 in Q4, and Pod Save America (Winner: Best News Podcast) moved from #24 to #20. After missing Q3, Unlocking Us with Brené Brown (Winner: Best Advice/Inspirational Podcast) reemerged on our chart at #27 and SmartLess featuring Jason Bateman, Sean Hayes and Will Arnett (#34 in Q3) has climbed its way to #12.

Comedy podcasts remained strong in Q4 of 2021, providing listeners positivity in winter months. News remains the second most consumed category, but True Crime has added 6 shows to its ranks, vaulting it to third place overall. Sports podcasts also saw an increase from 13 to 16 in Q4.