Audience Demographic Variations are Specific to Genre and Even Individual Podcasts

Don’t expect to find the same people listening to “The Joe Rogan Experience” as “Phil in the Blanks,” even if they’re #1 and #2 respectively.

This week, we take a deeper dive into the listeners of the top 5 podcasts from our podcast survey. If you’re not familiar with the overall survey results, take a look at the Top 25 podcast responses here.

Our survey showed that on average, respondents listened to 2.49 podcasts in the 7 days prior to the survey completion. We then looked at the average number of responses from listeners of the following shows: 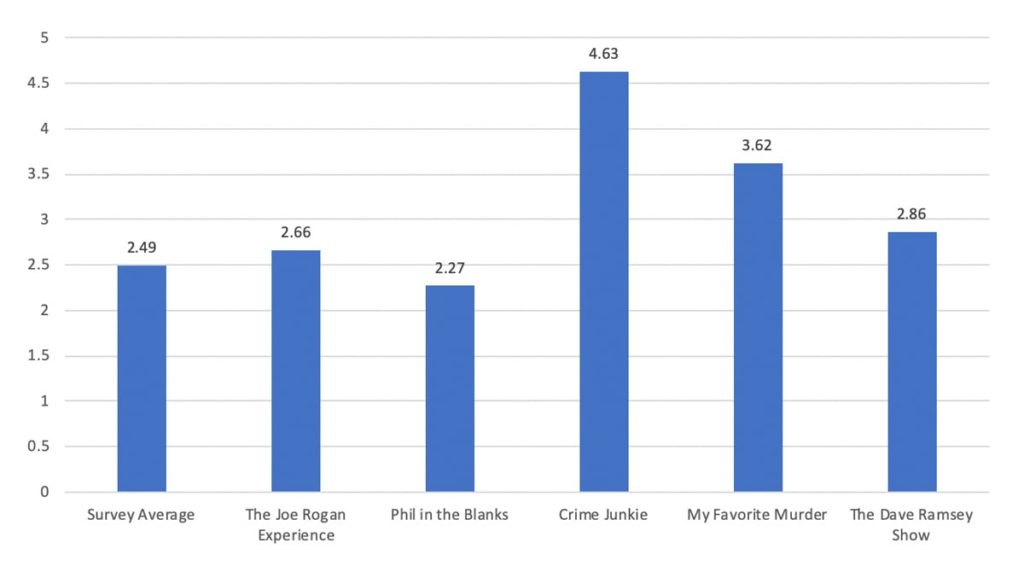 “Crime Junkie” and “My Favorite Murder,” the two True Crime podcasts in the top 5, both have listeners that consume a well above average 3-4+ podcasts per week. “Phil in the Blanks” came in the lowest at an average of 2.27 podcasts per respondent. 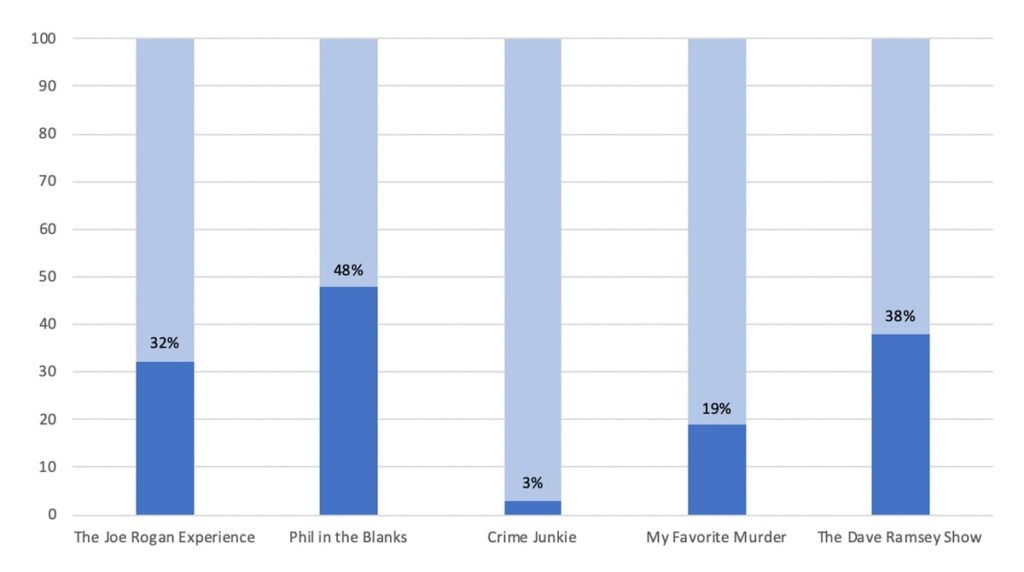 THE JOE ROGAN EXPERIENCE: Joe Rogan’s listeners are largely representative of the majority of podcast listenership, but his popularity blows away the competition.

According to our survey respondent demos, Joe’s listenership is 71% male and evenly split between high school and post-secondary graduates. Fifty seven percent of his audience reports earning over $50k per year, with 19% making over $100k. The average age of his listeners was 24. The most likely additional podcast responses from his listeners were “Serial,” “The Daily,” “This American Life,” and “This Past Weekend w/ Theo Von.” Joe Rogan’s listeners varied only slightly from the survey average on number of podcasts listened to and exclusivity, but he received nearly 3x the number of responses compared to the next most-responded podcasts, “Phil in the Blanks” and “Crime Junkie.”

Dr. Phil’s “Phil in the Blanks” listeners were the least likely to listen to other podcasts and had the highest average age at 38 years old. “The Dave Ramsey Show” draws in a slightly younger crowd averaging 31 years old and is much closer to the mean on exclusivity and number of podcasts per listener. That said, the biggest difference in audience makeup between the two shows can be seen in marital status.

Roughly 24% of listeners in both audiences listed themselves as divorced compared to 8% representation among total survey respondents. 62% of Dr. Phil’s audience is married compared to 47% of Dave Ramsey’s (Married respondents made up 42% of the survey population). In addition, Dave Ramsey’s “Single” audience is over double Dr. Phil’s at 29% but still far below the survey rate of 42%.

Although not significant enough to draw any correlation, we found it interesting that the most likely additional podcast listed by Dr. Phil’s respondents was “AMERICA’S DOCTOR: The Dr. Oz Podcast” from iHeartMedia. For Dave Ramsey listeners, other podcasts responses included “The Chris Hogan Show” and “The Ken Coleman Show” both from the Ramsey Network, falling under the categories of Investing and Career.

According to our survey, “Crime Junkie” and “My Favorite Murder” listeners are overwhelming female (85% of respondents for both) and highly educated with 63% of “Crime Junkie” and 71% of “My Favorite Murder” listeners reported having graduated from some kind of post-secondary education (including Associates, Bachelors, and Graduate degree programs). 70% of both audiences reported having incomes over $50k per year.

In the coming weeks, Media Monitors will continue to release insights from their recently conducted survey. If you have specific questions about our data or ideas for further iterations of the survey, please do not hesitate to reach out. Email us at podcasts@mediamonitors.com.

The survey was conducted by Precision Sample, a Macromill Group company, between January 5 and January 8, 2020 among respondents who indicated they had listened to podcasts in the last seven days. Survey size was a representative sample of N=961. The survey was offered to a proprietary panel of active respondents, available on both mobile (iOS and Android) and desktop (macOS & Windows) platforms. The survey asked the respondents to give unassisted answers but encouraged them to use their respective listening devices to create the list.