White Plains, NY (April 4, 2016) – Media Monitors, the leader in local media monitoring, released its update on the primary election and the spots that both parties have been running on TV in sixty top DMAs (Designated Market Area) in the last ten days – March 25 to April 3, 2016. 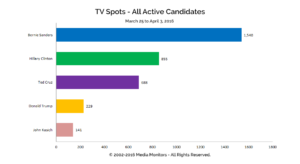 Sanders Still Marching Ahead on TV

Bernie Sanders is still in the lead with 1,540 spots in the last 10 days; All from his campaign.

Ted Cruz’s campaign aired 388 spots, while the Super PAC Club For Growth Action played 300 commercials on his behalf, bringing this total to 688 TV spots making him 3rd in the latest data.

Donald Trump For President ran 229 spots in the last 10 days keeping him in the 4th position.

And bringing up the rear, John Kasich’s friends at the Super PAC New Day Independent Media Committee aired 141 spots for him.