White Plains, NY (February 24, 2012) – Media Monitors released its study of political spots that were run in Michigan leading up to its primary election on Tuesday, February 28, 2012. Media Monitors captured data for Radio, TV and Local Cable from the candidate’s campaign and the Super PACs that ran spot schedules.

All the data was collected from January 1, 2012 to February 23, 2012 in the Michigan markets; on Radio, we surveyed Detroit and Grand Rapids, while in TV & Cable the data was from Detroit only: 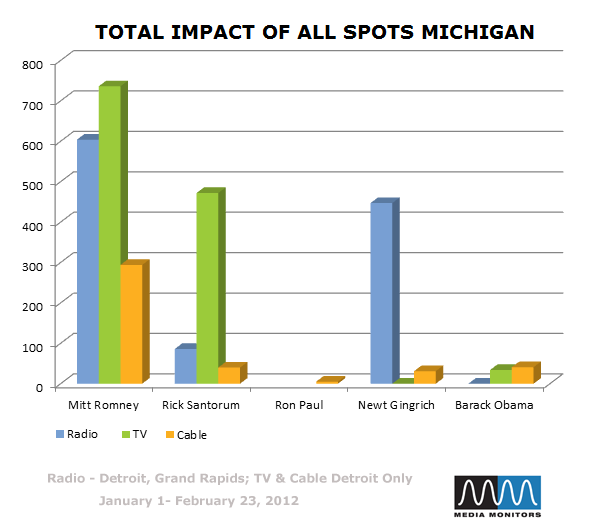 We combined the totals of campaign spots with those advertisements that were run for a candidate by Super PACs to derive this Total Impact graph. Mitt Romney is clearly leading the pack of four with 604 Radio commercials, 736 TV spots in the last two months and 294 Cable ads. Rick Santorum and his Super Pac ran 86 Radio spots, 472 TV spots and 40 Cable ads. Ron Paul ran only 5 Cable spots in the last two months, while New Gingrich’s campaign and Super PAC ran 447 Radio spots, zero TV and 31 Cable spots for the former Speaker of the House. Barack Obama’s Obama for America campaign ran 35 Cable ads, while a Super PAC called Priorities for USA Action ran anti-Romney ads on Obama’s behalf; 34 on TV and 6 on Cable bringing the totals for Obama in Michigan to 34 TV and 41 Cable spots.

In this report, we took a look at the comparison between Campaign spending and Super PAC spot loads: 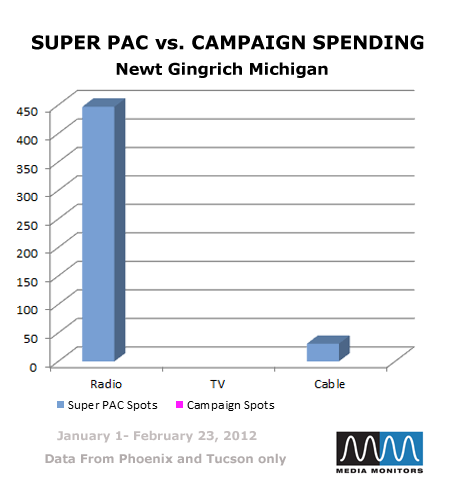 With Gingrich in Michigan, his campaign bought no spots in the last two months, while the Super PAC Winning Our Future bought 447 Radio spots and 31 Local Cable spots. 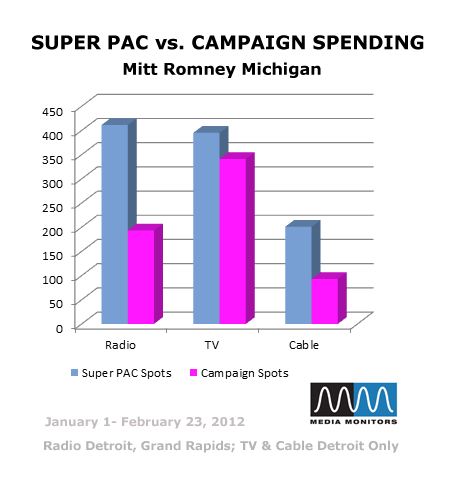 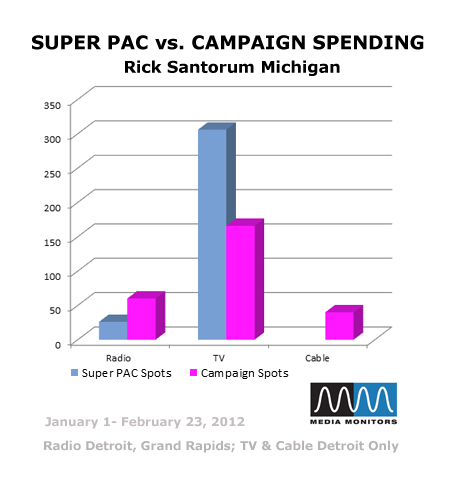 During the same period, Ron Paul’s campaign ran 5 Local Cable spots and no Super PAC aided his effort in Michigan.