Beyond the Ides of March

White Plains, NY (March 21, 2016) – Media Monitors, the leader in local media monitoring, released its update on the primary election and the spots that both parties have been running on radio in 82 major markets across America from March 11 through March 20, 2016. 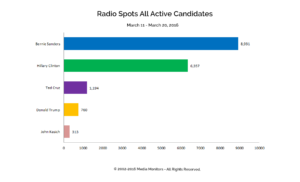 In the last 10 days, March 11 to March 20, Bernie Sanders For President aired 7,936 spots. The National Nurses United Patient Protection added 995 spots bringing his total to 8,931 spots putting him at #1 among active candidates running for President.

Hillary Clinton For President, her campaign, ran 4,536 spots, while her PAC Priorities USA Action bought 1,821 giving Clinton a total of 6,357 spots putting her at #2.

Ted Cruz For President placed 226 spots on the radio, while his PAC Trusted Leadership aired 869 spots and Keep The Promise I added 99 spots bringing his grand total to 1,194 spots putting him at #3.

The Super PAC New Day For America placed 313 ads for John Kasich on the radio making him last among active candidates.

Trump Being Attacked on all Media 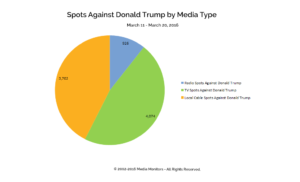 The assault against Donald Trump continued with 8,702 spots aired attacking the Republican front runner on Radio, Local Cable and Broadcast TV. Here is how it broke out.

On Radio, all 926 spots were purchased by Our Principles PAC.

On Broadcast TV, Our Principles PAC ran 1,857 spots against Trump, while the American Future Fund cleared 1,590 negative ads and the Club For Growth Action placed 627 spots bringing the total on TV to 4,074 ads.

Of note, on TV, the Conservative Solutions Super PAC ran 327 ads against John Kasich (not shown in the graph).

On Local Cable in the Media Monitors markets, Our Principles PAC ran 2,509 spots against Trump, the American Future Fund aired 779 spots and the Club For Growth Action added 388 negative ads. The Conservative Solutions PAC also added 26 spots in the against Trump column bringing the total to 3,702 spots on Local Cable.

Also of note on Local Cable, (not shown in graph) the Conservative Solutions PAC ran 31 spots against John Kasich.