Calm Before The Storm

White Plains, NY (April 11, 2016) – Media Monitors, the leader in local media monitoring, released its update on the primary election and the spots that both parties have been running on radio in 82 major markets across America from April 1 to April 10, 2016. 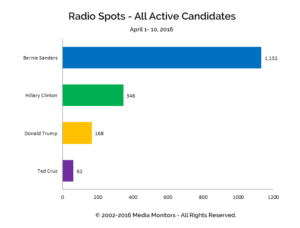 Radio is feeling the ‘Bern’

In the last 10 days, especially in New York, Bernie Sanders has been burning the midnight oil with 1,107 spots aired by his campaign, with 25 spots added by the National Nurses United Patient Protection brining this total to 1,132 spots. Clearly, number one.

In the #2 spot is the Hillary Clinton For President campaign that ran only 346 radio spots.

Feeble ‘Against’ Effort on Radio 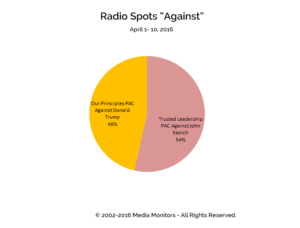 In the field of those negative ads, the Super Pac that supports Ted Cruz, Trusted Leadership, ran 82 spots against John Kasich, which was 54% of all negative primary spots.

The Super PAC Our Principles aired 46% of the negative ads against Donald Trump. Their total spot count was 71.