White Plains, NY (February 7, 2012) – Media Monitors released its study of political spots that were run in Minnesota, Colorado and Missouri leading up to its primary caucuses in each of the states. Media Monitors captured data for Radio, TV and Local Cable from the candidate’s campaign and the Super PACs that ran spot schedules from January 1 to February 7, 2012. 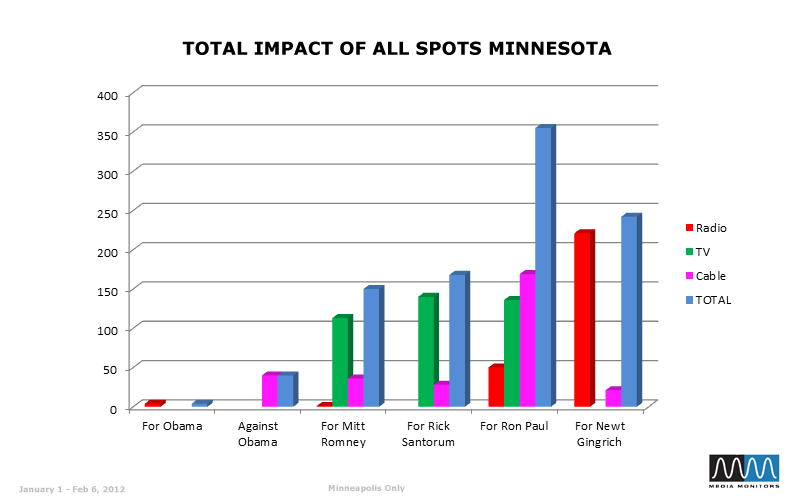 The biggest player in this market is Ron Paul with a total of 355 combined spots. Coming in second is Newt Gingrich with 242 spots. Rick Santorum has a respectable 168 spots supporting his effort, while Mitt Romney ran 150 spots. 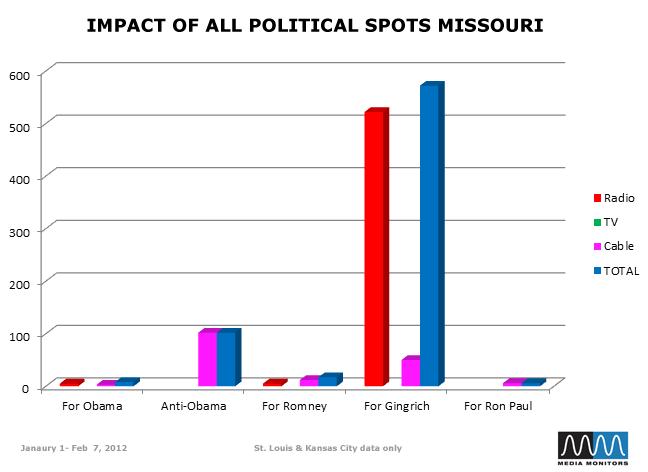 Gingrich, between his Super PAC ads and his own ads is leading the way in Kansas City and St. Louis with a total of 572 spots, which included 522 radio spots and 50 Local Cable ads. Ron Paul only ran a total of 6 spots, all on cable and Romney scratched the surface with 17 ads, 5 on radio and 12 on Local Cable. There were 102 anti-Obama ads run by Crossroads GPS and the RNC.

Newt Gingrich is leading the pack here, with his Super PAC doing its share of the work. Newt ran a total of 238 spots, with 219 on radio and 19 ads on Local Cable. Santorum ran 76 spots, on all Local Cable. Romney ran 36 spots on radio and another 8 on Local Cable giving him a grand total of 44 spots in the Denver market.