White Plains, NY (October 24, 2016) – Media Monitors, the leader in local media monitoring, released its update on the Presidential election and the spots that both parties have been running on TV in sixty-one top DMAs (Designated Market Area) in the last ten days – October 14 – 23, 2016. 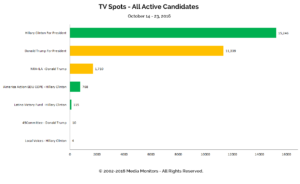 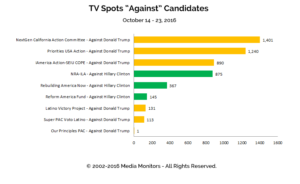 On the “Against” spots, the majority were against Donald Trump.

And finally, the Super PAC Our Principles bought one spot against Trump.

Our Totals on “Against” spots: Spots against Hillary Clinton totaled 1,387, while negative spots on Donald Trump totaled 3,776 ads.