White Plains, NY (February 29, 2016) – Media Monitors, the leader in local media monitoring, released its update on the primary election and the spots that both parties have been running on Radio in the markets we monitor from February 1 to February 28, 2016.
CLINTON & CRUZ AT THE TOP

First, let’s look at what we have been referring to as effective spot totals. This is the combination of all spots run by campaigns and Super PACs: 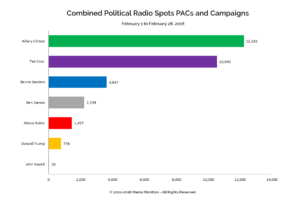 The Super PAC Keep The Promise I ran 8,285 ads promoting Ted Cruz and his campaign aired 1,924 spots, while his other Super PAC Lone Star Committee aired 214 spots. Courageous Conservatives PAC added on 117 spots. This made his total spots run for his efforts 10,540 spots.

Ben Carson’s campaign aired 1,912 spots, the BAMPAC (Black Americans PAC) ran 177 spots for Carson along with the organization Our Children’s Future adding on 150 spots for the retired neurosurgeon. His total was 2,239.

Donald Trump for President ran 773 spots and for the first time we see a Super PAC called TrumPAC (started by William Doddridge, the CEO of the Jewelry Exchange) which added 5 spots bringing his total to 778.

We included the break out of all the spots ran here: 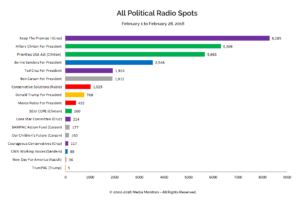 And with all the mudslinging that has taken place on the campaign trail and during the debates, we wanted to show how radio is being used for spots “against” candidates as well: 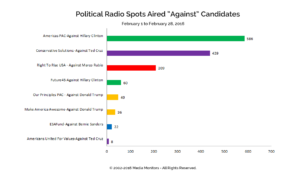 All the spots run against candidates are being funded by Super PACs and Hillary Clinton was the target of 646 spots. Coming next was Ted Cruz with 447 spots total against him.

Trump was only targeted in 85 spots in February. Bernie Sanders had only 22 spots attacking him on the radio.