For or Against a Candidate

White Plains, NY (February 2, 2016) – Media Monitors, the leader in local media monitoring, released its update on the primary election and caucuses in the states of Iowa and New Hampshire.

With the Iowa caucuses completed, let’s take a look at who ran what leading up to this first primary gathering. 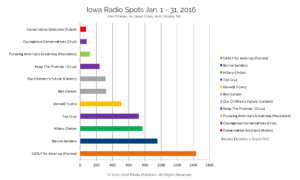 In the three markets: Des Moines, Quad Cities, IA and Omaha, NE (includes Council Bluffs, IA) that we focused on for this report, the spots for Carly Fiorina’s super PAC, CARLY for America top the list with 1,435 spots. In the graph above, when the candidate’s name is in parentheses it means a super PAC bought the spots, not the candidate. Also, for purposes of clarity, we excluded the spots that a Super Pac ran against any candidate. That comparison will come later in this report.

Ted Cruz ran 727 spots as a candidate, with a little help from his Pacs Courageous Conservatives with 79 and Keep The Promise I with 238 spots, giving him a grand total of 1,044 ads, which when taken together, would put him at #2.

Donald Trump, with no Super PAC support, ran 509 spots. Ben Carson aired 320 spots from his campaign, with another 312 spots from his Super PAC Our Children’s Future. Dr. Carson’s grand total would be 632, putting him 5th in overall reach.

With much of the debate about negative campaign messages, we now have a clear indication of the metrics involved with Media Monitors. Let’s look at the overall spots in the markets we surveyed that were run AGAINST candidates in our Iowa markets. 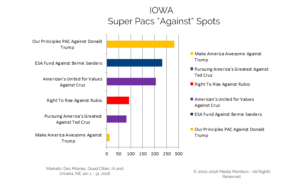 Now let’s take a look at New Hampshire with their Primary Election coming on February 9, 2016: 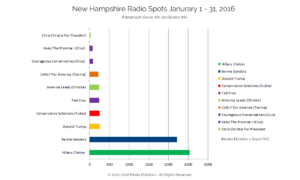 In our two focus markets, Portsmouth-Dover, NH and Boston, MA tell a bit of a different story. Hillary Clinton ran the most with 2,535 spots from January 1 to 31, 2016. Bernie Sanders is right behind her with 2,211 ads.

Next, and quite far back, is Donald Trump with 260 spots with Marco Rubio’s Super PAC Conservative Solutions nipping at his heels with 253 spots.

Ted Cruz cleared 240 spots from his campaign, then the Super PAC Courageous Conservatives added 87 spots and the Keep The Promise PAC placed 76 spots bringing his overall total to 403 putting him ahead of Trump and Rubio’s Super PAC.

And like what we saw in Iowa, many of the spots that have been run are spots targeted against a specific candidate. For example, there were 524 spots run by the Conservative Solutions PAC against Chris Christie. That PAC supports Marco Rubio. That same PAC ran 30 spots against Ted Cruz.