White Plains, NY (October 3, 2016) – Media Monitors, the leader in local media monitoring, released its update on the primary election and the spots that both parties have been running on radio in 85 major markets across America from September 23 to October 2, 2016. 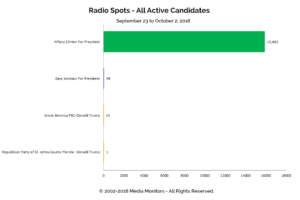 In the last ten days, Hillary Clinton For President aired 15,902 spots, up slightly from our last report at 15,590 ads.

The Great America PAC bought 15 spots, down from 124 spots, while the Republican Party Of St. Johns County Florida added 1 spot, down from 8 in the previous report. 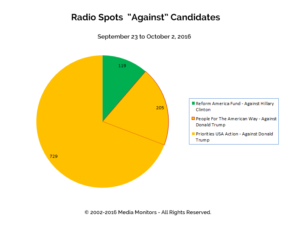 On the negative side of the coin, there were a total of 934 spots run with against messaging toward Donald Trump. Priorities USA Action, aired 729 spots, while a new Super PAC, People For The American Way, a known Pro-Democratic organization, ran 205 spots and are defined as a “Voters Alliance.”