White Plains, NY (March 7, 2016) – Media Monitors, the leader in local media monitoring, released its update on the primary election and the spots that both parties have been running on Radio in our monitored markets in the last 10 days: February 26 to March 6, 2016: 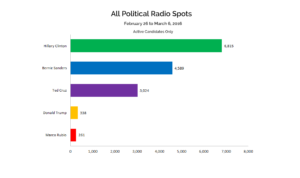 Hillary Clinton ran the most spots on the radio in the last ten days with a total of 6,815 ads. It breaks down as 3,738 spots from her campaign, 2,906 spots from her Super PAC Priorities USA ACTION and another 171 spots were purchased by the SEIU COPE (Service Employees International Union).

Bernie Sanders was in 2nd place in the last ten days with 4,589 spots. Interestingly, they were not all from his campaign, which ran the most at 4,398. He had help from the National Nurses United Patient Protection PAC placing 123 spots and the CWA Working Voices PAC, which added 68 spots.

And now for the “Against” spots: 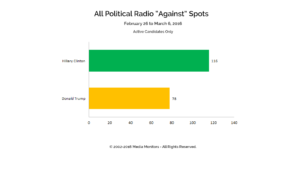 Just as the race has narrowed, the “Against” spots on the radio are focused on Hillary Clinton at 166 and Donald Trump at 78.

The spots against Clinton were purchased by Americas PAC (96) and Future45 (20).

Donald Trump attacks are coming solely from Our Principles PAC.