White Plains, NY (March 7, 2016) – Media Monitors, the leader in local media monitoring, released its update on the primary election and the spots that both parties have been running on TV in sixty top DMAs (Designated Market Area) in the last ten days – February 26 to March 6, 2016. 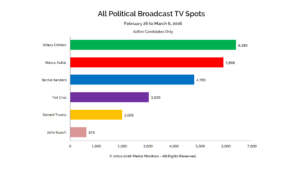 On Broadcast TV in the last ten days, Hillary Clinton leads with 6,389 spots. That was 6,253 from her campaign and 136 spots added by the Service Employees International Union SEIU COPE.

Bernie Sanders ran a total of 4,783 TV spots; 4,620 coming from his campaign. The Communication Workers of America PAC CWA Working Voices added 163 to the total.

Ted Cruz came in 4th with 3,030 spots. His campaign cleared 2,023 spots, while the Super PAC Keep The Promise I added 570 and his other Super PAC Stand For Truth played 437 times.

And coming in at 6th place was John Kasich with 625 spots. 351 ads were purchased by his campaign, while the Super PAC New Day For America added 274 spots. 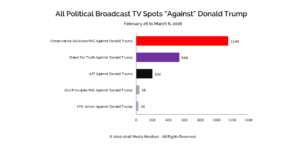 This has become a new element in this primary election. After Mitt Romney came out against Donald Trump, there seems to be a strong effort being made to work against the frontrunner within the Super PACs.

There were 1,953 spots that were run on TV in the last ten days that were targeted against Trump. Due to the Citizens Union decision by the Supreme Court in 2010, it gets a bit difficult to know who is behind each Super PAC, where the money comes from, or in some cases, what candidate they are promoting.

Out of the almost 2,000 spots, the most were purchased by Conservative Solutions PAC a known backer of Marco Rubio. They ran 1,149 spots.

Stand For Truth, a PAC that has been at times behind Ted Cruz, ran 538 spots against Donald Trump from February 26 to March 6, 2016.

Next, Our Principles PAC bought 38 spots against Trump. And finally, the CFG Club For Growth Action PAC added 26 spots to attack Trump.

And within the last ten days, these were the only “against” spots that were run on TV.