Interscope/Geffen/A&M, a unit within the Universal Music Group, had the most airplay at radio this year. Robin Thicke featuring Pharrell & T.I. “Blurred Lines” became the most listened to song in the monitored airplay era reaching 260 million listeners in its peak week. The song was also #1 at five formats simultaneously – Top 40, Rhythmic, Urban, Urban AC, and Hot AC.

Interscope also scored with big hits by Imagine Dragons, Maroon 5, former American Idol champion Phillip Phillips, and newcomer Kendrick Lamar – who was the #1 overall artist at Urban radio. All but Maroon 5 were on their first album releases setting up for a huge year for the developing artists. 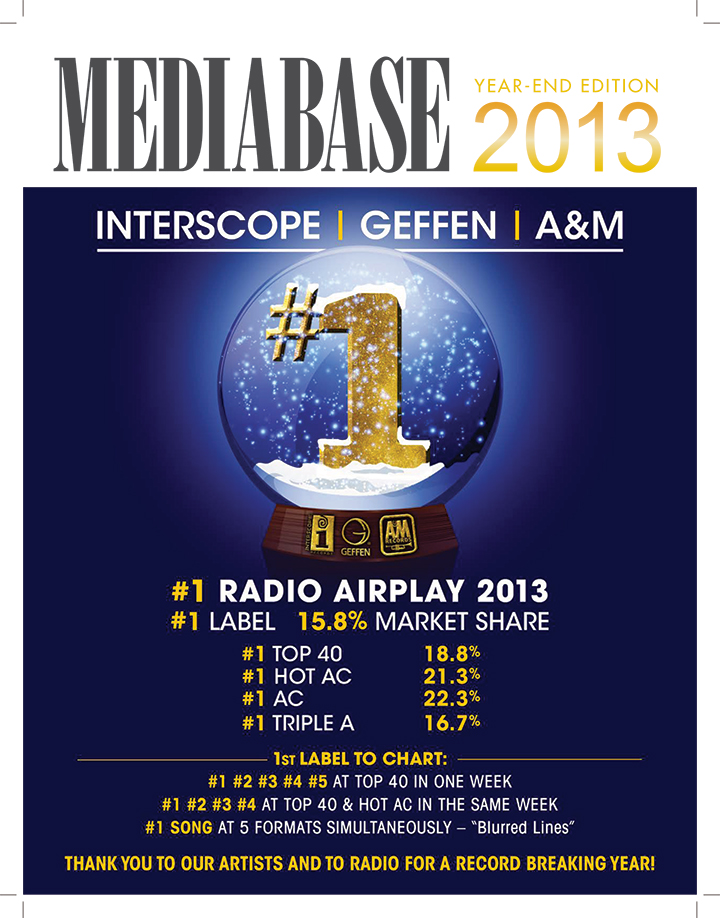 WMG’s Warner Bros. Records division scored one of the year’s biggest breakthrough acts with Macklemore & Ryan Lewis, who landed multi-format hits with “Thrift Shop,” “Can’t Hold Us,” “Same Love,” and “White Walls.” They were the #2 most-played artist at both Top 40 and Rhythmic for the year.

UMG’s Island Def Jam Music Group scored big with Rihanna as the #1 artist at Rhythmic, #2 at Urban, and #6 most-played at Top 40.

WMG’s Atlantic Records had the #1 artist at Top 40 for a second year in a row. After Flo Rida was #1 in 2012, they followed it with multiple hits from superstar Bruno Mars. Mars was also #3 at Hot AC and Rhythmic, and #5 at AC. Bruno Mars caps off a great 2013, as he gears up to kick off the new year by playing the Super Bowl on February 2, 2014.

Sony Music’s Columbia Records broke through with one of Alternative music’s biggest new acts with the Neighbourhood. Meanwhile, J. Cole had multiple #1 hits at both Rhythmic and Urban.

2013 was a big year for Country music. Leading the pack with the #1 song was “Cruise” by Republic Nashville’s Florida-Georgia Line – who also was the #1 artist at the format for the year. That song also crossed to Top 40, Hot AC, and AC and became a multi format hit. Republic also had the #2 song with “Better Dig Two” by the Band Perry. Capitol Music was the #1 label led by big hits from Luke Bryan, Lady Antebellum, and Darius Rucker to name a few.

Mediabase employs a spin-based methodology that counts the total number of spins amassed by each recording company. Mediabase then converts the grand total of spins into a percentage to come up with a comprehensive label performance review that ranks each company by percentage of chart share.