White Plains, NY (March 14, 2016) – Media Monitors, the leader in local media monitoring, released its update on the primary election and the spots that both parties have been running Radio in the last ten days – March 4 to 13, 2016. 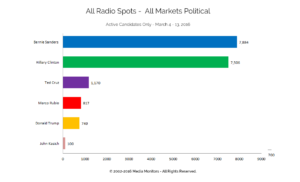 Ted Cruz’s campaign bought 390 spots in the last ten days, while the Trusted Leadership PAC ran 550 spots and the Super PAC Keep The Promise I added 230 spots bringing Cruz’s total to 1,170 spots on the radio.

And as we have done each week, here are the totals for spots aired against candidates. All the spots run on radio against any candidate, were all spots against Donald Trump bought by Our Principles PAC: 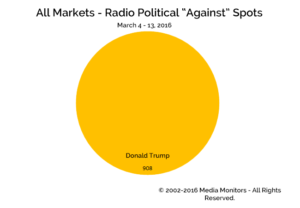