We have been tracking the political radio spots in Boston, Massachusetts and Portsmouth-Dover, New Hampshire for our focus markets. All the data we captured for this radio report was from January 1st to February 7th, 2016. 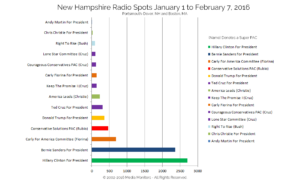 Donald Trump, the frontrunner in New Hampshire according to most polls, ran 360 spots – 186 in Boston and 174 in Portsmouth-Dover, NH. We will address the “against” spots that were run later in this report.

The Super PAC supporting Jeb Bush, Right To Rise USA, ran 94 spots – 37 in Boston and 57 in Portsmouth-Dover, NH. Jeb Bush ran no ads from his campaign.

But as in any election, we have those ads that were run specifically against certain candidates: 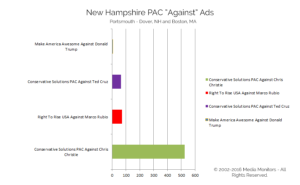