White Plains, NY (August 8, 2016) – Media Monitors, the leader in local media monitoring, released its update on the primary election and the spots that both parties have been running on TV in sixty-one top DMAs (Designated Market Area) in the last ten days – July 29 to August 7, 2016. 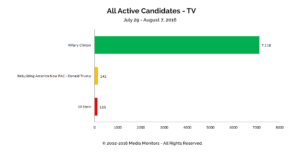 In the last ten days on TV, the Hillary Clinton campaign aired 7,118 spots.

Next was the Super PAC Rebuilding America Now that ran 142 spots. This committee is a single-candidate super PAC in support of Donald Trump.

Airing 120 spots from July 29 to August 7, 2016 was the Green Party’s candidate Jill Stein. According to OpenSecrets.org, Jill Stein’s campaign has raised $856,200 from campaign donations and has no Super PAC support. The candidate has spent more than $600,000 so far. 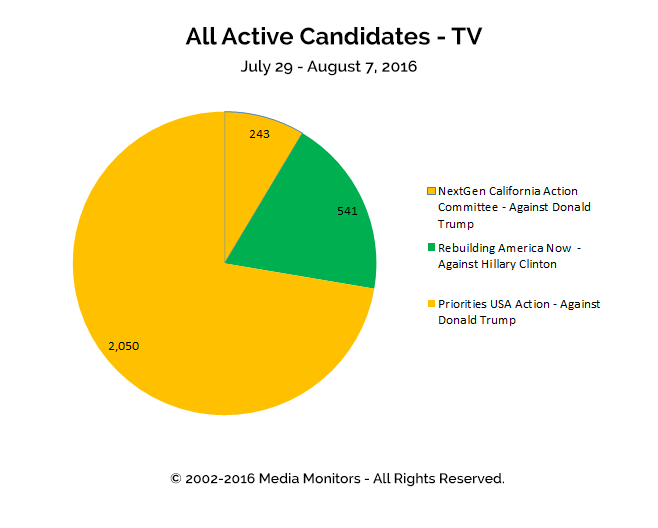 In the last ten days on TV, the majority of the “against” spots were run contrary to Donald Trump. The pro-Hillary Super PAC Priorities USA Action ran 2,050 spots.

The Super PAC Rebuilding America Now ran 541 spots against Hillary Clinton. This Super PAC is based out of Alexandria, VA.