White Plains, NY (October 31, 2016) – Media Monitors, the leader in local media monitoring, released its update on the Presidential election and the spots that both parties have been running on radio in 85 major markets across America from October 21 – 30, 2016. 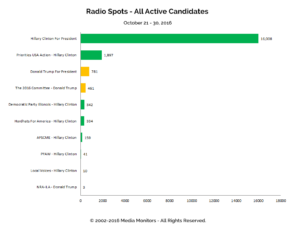 Priorities USA Action, the Super PAC, aired 1,897 spots on behalf of Hillary Clinton. In our last report they ran 1,271 ads.

Donald Trump For President bought 781 spots, up from the 29 that we reported last time.

The Democratic Party of Illinois bought 342 spots in support of Hillary Clinton, while a Super PAC called Hardhats For America ran 334 spots for Clinton. Both are new to this report.

And finally, the National Rifle Association’s Institute For Legislative Action bought 3 spots in support of Trump.

The total number of spots run for Hillary Clinton was 18,791, while the total for Donald Trump was 1,245 ads. 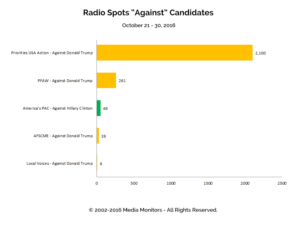 On the negative side of the ledger, there were 2,100 spots run against Donald Trump by Priorities USA Action in the last ten days. That is down from 2,359 in our last report.

Next, the Super PAC, PFAW (People For The American Way) aired 261 spots against Donald Trump.