In a sure sign that election season is underway, political advertising from both sides of the aisle began hitting the radio airwaves this summer. Altogether, the top 50 political advertisers aired 49,614 spots between June 1 and July 31, 2020, compared to just 3,625 instances between April 1 and May 31, 2020, according to Media Monitors’ latest ranking. This marks an increase in radio occurrences of 290% between April 1 and May 31 to June 1 and July 31.

“Just as we’ve been expecting, there’s a clear uptick in political advertising over the last two months,” said Philippe Generali, president and CEO of Media Monitors. “In the first wave of election season spots, we can see that all types – Presidential campaigns, Congressional candidates and advocacy and political action groups – are gearing up, beginning with radio. This will be a high-attention campaign season, and we expect political advertising to continue to grow to be a large share of the late summer and fall advertising inventory.”

Democratic presidential candidate Joseph Biden leads the list. His team aired 7,599 radio spots between June 1 and July 31 – significantly more than any other campaign. It’s also far higher than the nine occurrences the candidate aired during April and May.

The American Postal Workers Union ranked second, airing 3,893 instances on radio. Its campaign, Save the Post Office, is urging the public to reach out to their representatives and ask them to support to finance the U.S. Post Office operations.

Meanwhile, conservative political action committee, One Nation, aired a total of 3,867 spots across four campaigns, enough to rank each individual campaign among the top 50. In June, the organization launched a multi-state summer advocacy blitz across television and radio in six swing states, including Arizona, Iowa, Maine, North Carolina, Colorado and Montana. 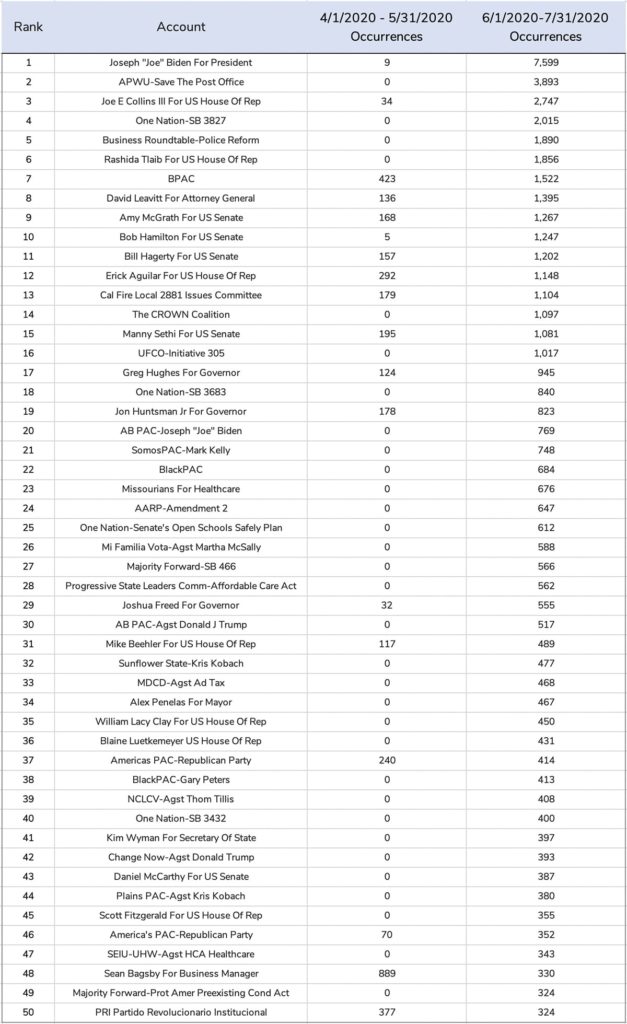