White Plains, NY (November 7, 2016) – Media Monitors, the leader in local media monitoring, released its update on the Presidential election and the spots that both parties have been running on radio in 85 major markets across America from October 28 to November 6, 2016. 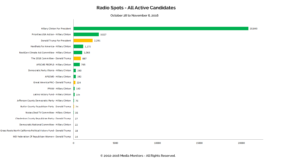 In the last ten days, not only have we lots of political spots to count, but more organizations and PACs running them.

Hillary Clinton For President was the leader of the pack with 20,843 spots.

Next was the Donald Trump campaign with 2,291 ads.

Hardhats for America added 1,172 spots for Hillary Clinton along with the NextGen Climate Act Committee which bought 1,063 spots.

The 2016 Committee aired 887 spots for Donald Trump in the last ten days.

The PFAW (People For the American Way) added 140 spots for Clinton and the Latino Victory Fund ran 135 pro-Clinton spots.

The MD Federation of Republican Women bought 14 spots for Trump, along with 8 spots paid for by the National Black Conservatives America for Trump.

In our final Radio report of the 2016 Political season, here are your totals: there were 27,853 radio spots run for Hillary Clinton in the last ten days compared to 3,543 spots for Donald Trump. 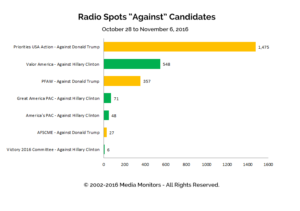 The PFAW (People For the American Way) added 357 spots against Donald Trump.

The Great America PAC aired 71 spots against Clinton, along with the America’s PAC which played 48 ads with negatives on Clinton.

And finally, the Victory 2016 Committee bought 6 sports against Clinton.