White Plains, NY (April 25, 2016) – Media Monitors, the leader in local media monitoring, released its update on the primary election and the spots that both parties have been running on TV in sixty top DMAs (Designated Market Area) in the last ten days – April 15 to April 24, 2016: 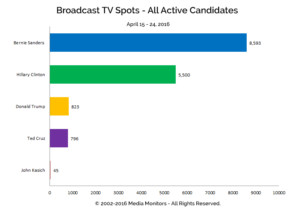 Bernie Sanders For President has put some significant distance between the Senator from Vermont and the rest of the pack. In the last 10 days they aired 8,593 spots, all from his campaign.

Ted Cruz For President bought 661 TV spots in the last 10 days, with the Club For Growth Action PAC adding 135 bringing his total to 796 spots.

The New Day for America Super PAC ran 27 spots for John Kasich, while the New Day Independent Media Committee added 18 spots for the Ohio governor bringing his total to 45 spots. 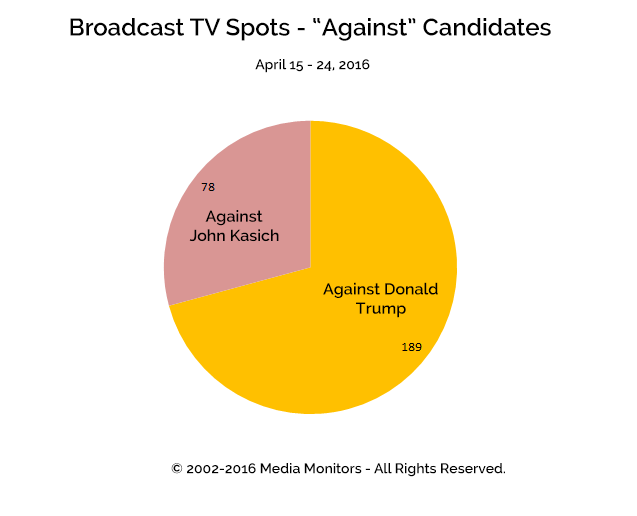 There were two forces using TV in a negative manner: Our Principles PAC aired 189 spots against Donald Trump, while the Trusted Leadership PAC – for Ted Cruz, ran 78 spots against John Kasich. It will be interesting to see if this activity stops in light of the recent announcement of a Cruz-Kasich alliance.