We have been tracking the political radio spots in Greenville-Spartanburg, Columbia and Charleston, South Carolina for our focus markets. All the data we captured for this radio report was from January 1st to February 14th, 2016. 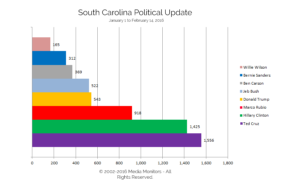 Ted and Hillary top the spot list in South Carolina to date.

Since the first of the year, Ted Cruz has taken the lead in spots in Greenville-Spartanburg, Columbia and Charleston, SC. His Super PAC Keep The Promise I aired 1,015 spots, while his campaign ran 517 spots and the other Super PAC Lone Star Committee aired 24 spots bringing his grand total to 1,556 spots.

Next was Marco Rubio with 918 spots total, which was made up of only spots from his Super PAC Conservative Solutions PAC.

Donald Trump, the front-runner in most polls, aired 543 spots, all from his campaign coffers Donald Trump For President.

Jeb Bush ran 522 spots; 373 spots from Jeb Bush For President campaign, while another 149 spots came from the Super PAC Right To Rise USA.

Ben Carson’s pitch was heard in 369 spots since the first of the year with 277 spots coming from his campaign, while another 92 were provided by the Black America’s Action Fund.

Interestingly, Bernie Sanders only ran 312 spots from his campaign.

And of course, there are the “Against” spots we show in each report: 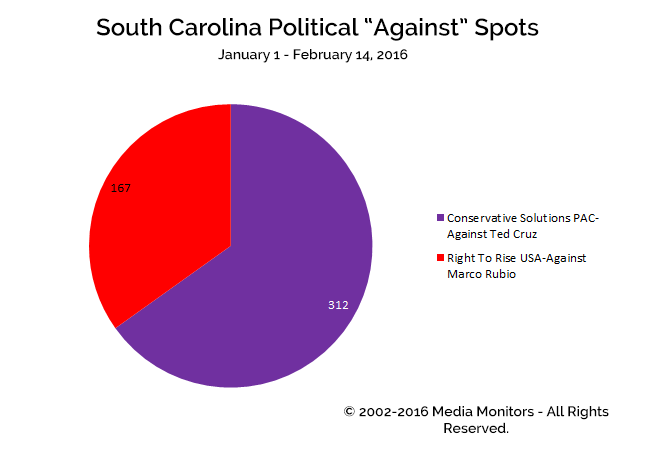