White Plains, NY (March 1, 2016) – Media Monitors, the leader in local media monitoring, released its update on the primary election and the spots that both parties have been running on TV in sixty top DMAs (Designated Market Area) from February 1 to February 28, 2016. 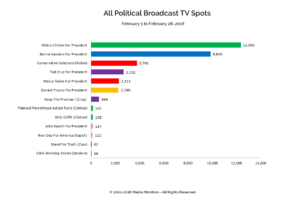 On Broadcast TV, Hillary Clinton’s campaign aired 12,350 spots putting her in the #1 position. Along with 165 spots added by the Planned Parenthood Action Fund and 159 ads bought by the Service Employees International Union, her grand total for February 1 to 28th was 12,674 spots.

Coming in #2 was Bernie Sanders with 9,849 spots. He also received 58 additional spots from the Communication Workers of America PAC CWA Working Voices bringing his total to 9,907 spots.

The Super PAC Conservative Solutions played 3,792 spots for Marco Rubio, while his campaign ran 2,312 spots bringing his total to 6,104 spots earning him a clear #3.

Ted Cruz’s campaign ran 2,702 spots along with his Super PAC Keep The Promise I which ran 666 spots and his other Super PAC Stand For Truth ran 62 spots. That brings the Cruz total to 3,430 spots. 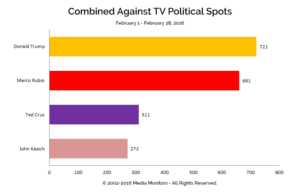 During this election cycle, negative ads are part of the story:

In the month of February, all the negative or what we call “against” ads were run against Republican candidates, which mirrored their debate theatrics and rally rhetoric.

Donald Trump is being targeted most with a total of 721 “against” ads.

Ted Cruz was mentioned in a negative light in 311 spots.

And finally John Kasich was #4 with 272 spots against him.

Here are the details of who sponsored the negative ads: 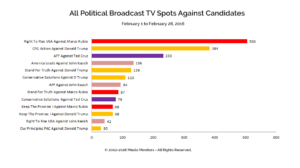