White Plains, NY (March 28, 2016) – Media Monitors, the leader in local media monitoring, released its update on the primary election and the spots that both parties have been running on radio in 82 major markets across America from March 18 through March 27, 2016. 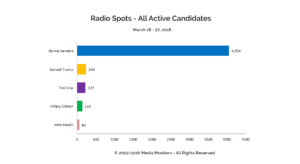 Clinton Slows Down, Bernie Spends On

Last week Bernie Sanders kept running lots of Radio spots with 3,358 spots aired by his campaign Bernie Sanders For President, while 696 spots were run by the Healthcare Workers’ PAC National Nurses United For Patient Protection. That made his grand total for the last ten days 4,054 spots.

Donald Trump ran 243 spots, which was down from his 760 of the previous ten days.

Hillary Clinton For President ran 143 spots, down from 4,536 that her campaign aired in the previous report. 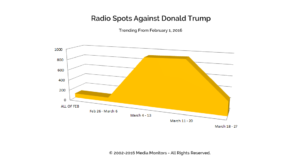 When we started our reports, there were ads run by many Super PACs targeted at specific candidates. The most, if not all, were aimed at Donald Trump. But that number is trending downward. During the period of February 1-28, there were only 85 spots aired. Then from February 26 to March 6, we captured 78 spots. From March 4 to 13, that number had swollen to 908 spots. In the report for March 11 to 20, we saw 926 spots, however, in the last ten days we see a change. From March 18 to 27, there were 257 spots.