The Power of Donald Trump Media

This report looks at how the presidential candidate aired spots on a week-by-week basis since the first of the year: 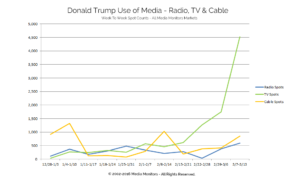 Since the beginning of February, the Trump campaign has focused most of its money on TV. Local cable surged in the beginning of January and February, but then took a backseat to TV. Radio appears to be not as important to the Trump people. We also show the combination of the three media: 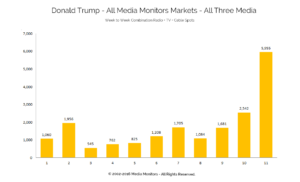