White Plains, NY (March 7, 2016) – Media Monitors, the leader in local media monitoring, released its update on the primary election and the spots that both parties have been running on TV in sixty top DMAs (Designated Market Area) in the last ten days – March 4 through March 13, 2016. 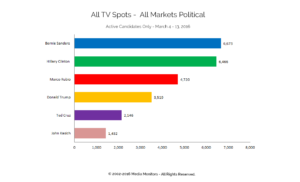 On Broadcast TV in the last ten days, Bernie Sanders has taken the lead with 6,673 spots aired between March 4 and March 13, 2016. All the TV spots were run from his campaign Bernie Sanders For President.

Hillary Clinton was slightly behind Sanders with 6,466 spots, which were all purchased by her campaign. 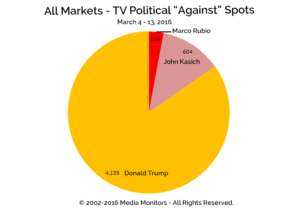 As we do with each report, we give the count of “Against” spots aired. An “Against” spot for our report is a spot that is run by a Super PAC or organization against a specific candidate. A spot run by a Candidate’s campaign might be a negative ad, but is not counted in this tally.

In the last ten days, the most “Against” spots were run against Donald Trump. They break down as follows: 1,552 bought by AFF – American Future Fund, a conservative and free market Political Action Committee. Next, Our Principles PAC was formed in January 2016 to thwart Donald Trump’s 2016 presidential campaign and in the last ten days ran 1,510 spots against Trump. CFG, Club for Growth Action is a Super PAC with a stated mission of “defeating big-government politicians and replacing them with economic conservatives and they aired 821 spots against Trump. And finally, the Super PAC that promotes Marco Rubio, Conservative Solutions added 252 spots bringing the total to 4,135 “Against” spots.

And the Super PAC partial to Ted Cruz, Stand For Truth, aired 144 spots against Marco Rubio.