White Plains, NY (August 22, 2016) – Media Monitors, the leader in local media monitoring, released its update on the primary election and the spots that both parties have been running on TV in sixty-one top DMAs (Designated Market Area) in the last ten days – August 12 – 21, 2016. 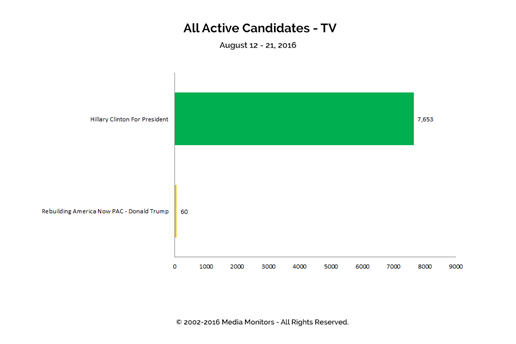 Even with the campaign shake-up on the Trump side, we haven’t seen any spots being purchased by his campaign. 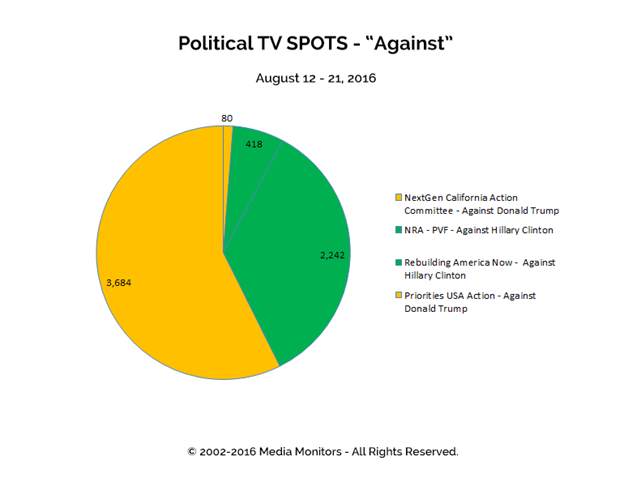 On the negative side of the Broadcast TV side of the coin, the mudslinging is a bi-partisan sport.

In the last ten days, Priorities USA Action PAC ran 3,684 spots against Donald Trump. This PAC is pro-Hillary Clinton and has as its biggest contributor George Soros. According to OpenSecrets.org, they have spent $32,867,887 against Donald Trump, as of August 8, 2016.

The National Rifle Association aired 418 ads against Hillary Clinton paid for by their Political Victory Fund.

And finally, the group NextGen California Action Committee ran 80 spots against Donald Trump. As of August 8, 2016, according to public records, they have spent $5,158,258 promoting voter registration with an anti-Trump message.