What Happens in Vegas…

White Plains, NY (February 18, 2016) – Media Monitors, the leader in local media monitoring, released its update on the primary caucuses that will be taking place in Nevada. Democrats caucus on Saturday, February 20, 2016 and the Republicans meet on February 23, 2016.

We have been tracking the political radio spots in Las Vegas for our focus market. All the data we captured for this radio report was from January 1st to February 14th, 2016. 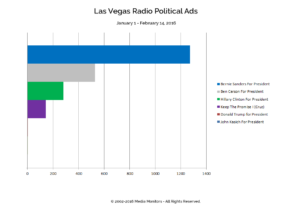 Top of the pack using radio up to this date has been Bernie Sanders with 1,270 spots.

Next, Dr. Ben Carson cleared 529 spots since the first of the year.

But the real story might be what happened on TV in Las Vegas in the same date range: 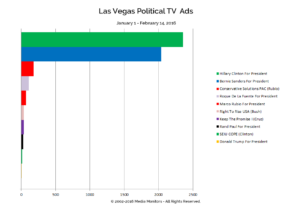 On Broadcast TV, Hillary Clinton For President ran 2,357 spots and the Service Employees International Union COPE aired 13 spots giving Clinton the lead on TV with a total of 2,370 spots.

Bernie Sanders was not far behind with 2,037 spots, all from his campaign chest.

The Super PAC Conservative Solutions placed 180 spots for Marco Rubio, while his campaign aired 68 spots giving him a total of 248 spots.