White Plains, NY (February 23, 2016) – Media Monitors, the leader in local media monitoring, released its update on the primary election and the spots that both parties have been running on the Radio.

For this week’s report, we wanted to present the data in a little different way. We combined the Super PAC and Campaign totals to give a clearer look at the race so far. We also eliminate anyone who suspended their campaign for President. 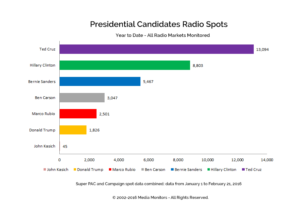 In a campaign season that has keep the pundits busy trying to analyze what has happened, there is some evidence that free publicity may work as well as radio or TV.

Donald Trump may be in 4th place out of all candidates using radio, but is clearly the front-runner in most polls.

Looking inside the numbers: Ted Cruz’s support from Super PACs is greater than any other candidate.

Hillary Clinton also got a boost from her Super PAC. Clinton aired 8,803 spots in total with Priorities USA Act running 2,362 spots, or almost 30% of her spots run so far.

Bernie Sanders, running spots only from his campaign chest, clocked in with 5,467 ads.

Marco Rubio aired 2,501 spots in total, with his Super PAC Conservative Solutions PAC paying for 2,075 spots and his campaign running 426 ads. With only 17% of his ads being purchased by his campaign, on-going fund raising will be a priority.

Donald Trump tells everyone his campaign is self-funded and indeed, the only spots that were run for him came from his political corporation, to the tune of 1,826 spots so far.

And finally, John Kasich is being supported by the Super PAC New Day For America that ran 36 radio spots since January 1st of this year.