White Plains, NY (February 24, 2016) – Media Monitors, the leader in local media monitoring, released its update on the primary election and the spots that both parties have been running on TV in sixty top DMAs (Designated Market Area).

We combined the Super PAC and Campaign totals to give a clearer look at the race so far. We also eliminate anyone who suspended their campaign for President. 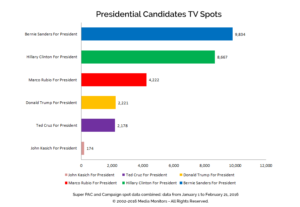 In the markets where Media Monitors tracks TV spots, Bernie Sanders’ campaign has cleared the most spots with 9,834 spots.

Coming in #2 was Hillary Clinton who ran a total of 8,667 spots, with 26 of them being contributed by the Service Employees International Union COPE.

Ted Cruz ran a total of 2,178 spots, with 328 of them from his Super PAC Keep The Promise I and 171 spots coming from the Super PAC Stand For Truth.

John Kasich aired 174 spots, all from his campaign.
The Value of Negative Ads?